Looking at Kagurazaka from Shinnai Alley (27)

First Attendance by The Imperial Couple at an Individual’s Recital of Traditional Music: Report, Part 2

Performing Ichinotani Futaba Gunki in the presence of the Imperial Couple

After that, the Emperor and Empress individually talked with each of us in turn. All of us had flushed faces because of the excitement of this happy moment. I don’t remember what I said to Their Majesties. I’ve been tense on stage, but I’ve never had stage fright. Talking with Their Majesties, however, was somewhat more difficult, and I did have stage fright. 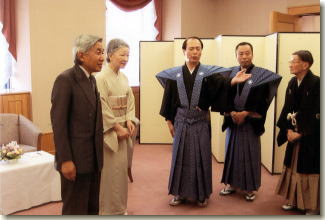 Introducing colleagues to the Imperial Couple after the recital

Although Their Imperial Majesties often hear Western music performed, I was wondering whether they would enjoy shinnai. I had heard that Their Majesties had never been in attendance at an individual recital of Japanese traditional music. But Their Majesties seemed to understand shinnai. I appreciated that very much. Their Majesties urged us to do our best for Japanese traditional music. I was deeply honored to receive this encouragement.
Before my part of the concert, the first work that day was performed by four artists: two doing joururi and two playing the shamisen accompaniment. All four of them were women. Their Majesties were not in attendance for their performance, but after the concert, I was very impressed when I realized that Her Imperial Majesty was spending a long time talking with those women.
We all were impressed with this precious, honorable event that will (probably) never happen to us again. When the amount of time scheduled for Their Majesties’ conversations with the performers had been considerably exceeded, Their Majesties retired at the urging of their attendants. As Their Majesties left, we bade them farewell in a worshipful fashion. My undergarments were drenched with sweat. In advance of this concert, I had some worries that came continually to mind. First, I hoped that no catastrophic disasters or major accidents would occur, and I also hoped that Their Majesties would be in good health that day.
Next, I prayed that I would be in my best health condition on the day of the concert. I was much more careful than usual to avoid accidents and not catch cold. Every day, I prayed seriously that the performance could be held without incident, and that Their Majesties would be satisfied with the concert and then return safely to the Imperial Palace.
As events turned out, I was deeply relieved that, thanks to the blessings of the gods, I was able to present a wonderful concert. For some days after the performance, I was filled with great pleasure. After that, it became time for a new start for shinnai. Every day, I braced myself for what I felt was a critical moment for shinnai.
I don’t mean this report on Their Majesties’ attendance at my recital to be boasting about myself, or even as an occurrence that is fortunate just for the shinnai world. Rather, it is a matter of congratulations for the entire field of Japanese traditional music. 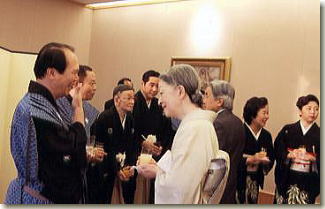 In conversation with the Empress

This should not end as an isolated celebratory event. It was because I explained to Their Imperial Majesties about the crisis relating to the future of shinnai that Their Majesties’ attendance at my recital was realized. This opportunity should be used by all those in the shinnai world for the promotion and dissemination of the shinnai genre. We should grapple with the future development of shinnai. My own calling has now gained purpose and momentum.
The seed I had sowed with my words sprouted and bore fruit. And “new seeds” were sowed. These were the seeds sowed by Their Majesties’ hands. It is up to us whether to support the growth of these seeds or leave them to wither. I will have great regrets if we don’t raise them to be splendid and strong.
Through experiencing this concert, I realized the great significance of a once-in-a-lifetime opportunity. Now, looking back, I think that this was a concert for a great century. Overall, I was lucky to have this great lifetime experience. I am thankful for my good fortune.