Looking at Kagurazaka from Shinnai Alley (23)

Shinnai Performance of a Poem in Scottish English in the ancient city of Edinburgh, capital of Scotland
During my time as Special Cultural Envoy, when we went to various places for our performances, although I did some of the driving, my student Tsuruga Isekichi was the main driver, and I was the navigator. Even though she had got her driver’s license just before the trip, she did quite well. I imagine that she got more tired from the driving than she does when she is working as a shinnai professional.
How to get around in the streets in the center of London is very difficult for strangers to understand. Often we got lost and were stranded because we couldn’t understand where we were. However, outside of London, there were almost no traffic lights. I was impressed with the system of roundabouts (rotaries), which is very rational. Japan should make more use of that system.
We drove straight north from London to Scotland. Watching the map, we drove through a countryside with gentle hills, and entered Scotland. Along the way, we toured the ruins of a medieval castle, and did a shinnai workshop at an elementary school. Then we arrived in Edinburgh. 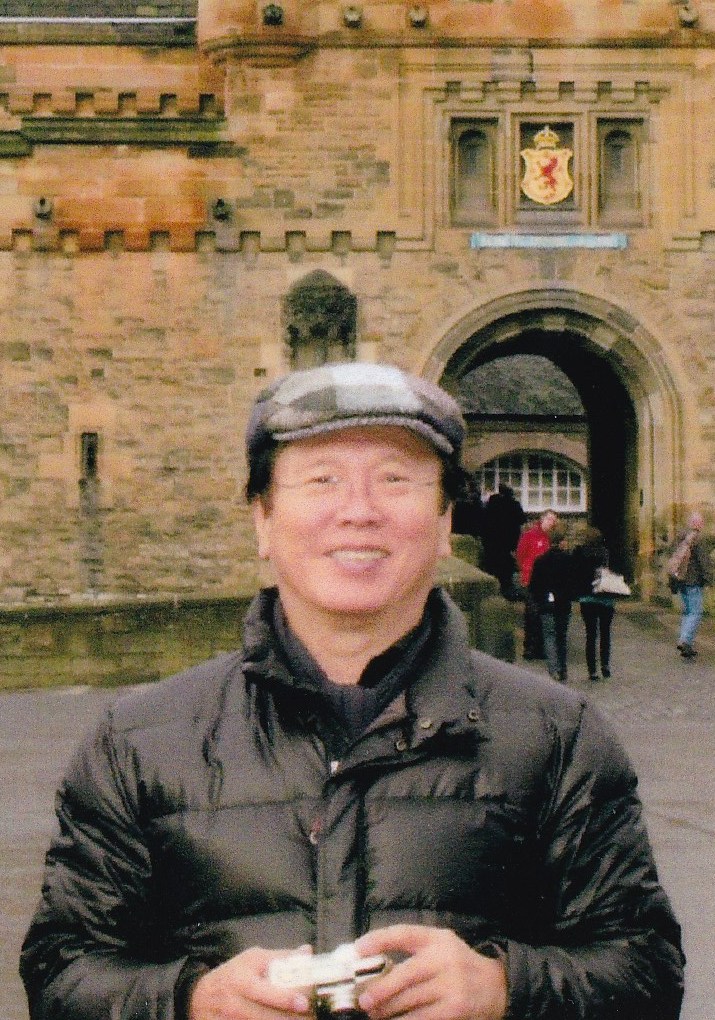 Edinburgh was the place that I most wanted to visit during this overseas trip. The old town and the castle retain a medieval atmosphere that is unchanged in these modern times. Walking on a cobblestone road past a quiet row of houses, I forgot modern times. Edinburgh has a different flavor from the old cities in Japan. Walking up the slope to Edinburgh Castle, I felt as if I’d entered a time capsule and was a medieval knight.

Before I left for this trip, my daughter told me to eat haggis at an Edinburgh restaurant that she recommended. She was sure that I’d enjoy it. “Well, the taste of haggis is something that people either like or dislike.” As for me, it was OK.
I was very satisfied with other restaurants, where we ate mussels and drank wine and Scotch whisky.
I should return to the main topic.
The first thing we did in Edinburgh was to go to a reception held for us at the Japanese Consulate, followed by a smaller party at the Consul’s residence for around 20 people. Besides the Consul General and his wife, the guests included faculty from the University of Edinburgh, representatives of Japanese companies located in the Edinburgh area, and others interested in the arts of Japan.

I performed the shinnai work Rancho in the drawing room of the residence. There was no stage. First, I briefly explained the story of Rancho. Because most of the people in the audience were Scots, my comments were translated. Then I performed the work in Japanese.
The performance lasted about 15 minutes. I could see, sitting in the front row, a woman using her handkerchief to wipe tears from her eyes. She must have been moved by the story of Rancho and by its sorrowful melody. She must have been a sensitive person. That experience increased my fondness for Scotland.
The next day, I performed at an auditorium at the University of Edinburgh. There were about 150 people in the audience, including some whom I’d met the previous evening at the Consul’s residence. The audience waited for me quietly in the lovely, historic hall. 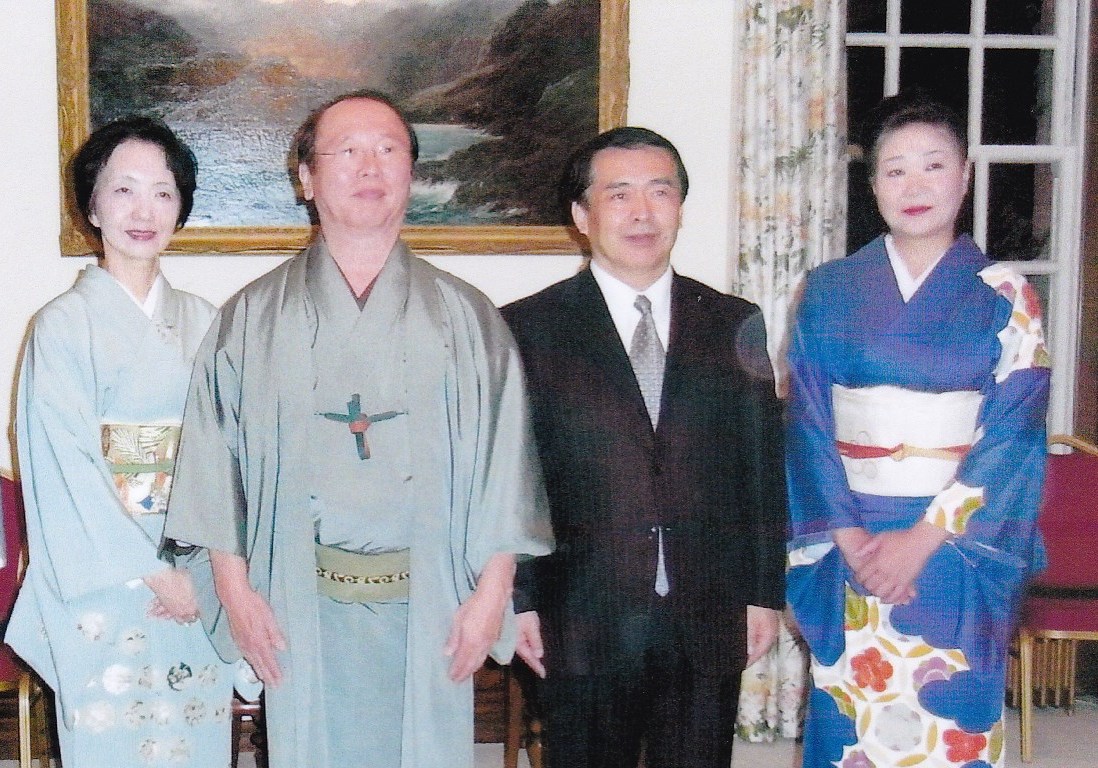 With the Consul General, his wife, and Tsuruga Isekichi

After I had performed two shinnai works in Japanese, I wanted to perform something in Scottish English. I decided to improvise a shinnai version of one of Robert Burns’ most famous poems, A Red, Red Rose. The famous Scots poet is well known among Japanese, because everyone knows Auld Lang Syne. Moreover, I wanted to narrate it in Scottish English. I think that many people know that Scottish English is quite different from standard English. I was worried that performing in Scottish English might be a difficult challenge for me, but as soon as I knew that the University of Edinburgh would be included in this tour, I made up my mind to try it.
After I told the audience that I was going to do an improvisation, they waited with special interest and curiosity. This performance was unique. I concentrated deeply as I played the shamisen and narrated the poem. The performance lasted around 10 minutes. I was tense, and it seemed to me that the audience members were tense too. I finished performing the Burns poem. What was their reaction…? 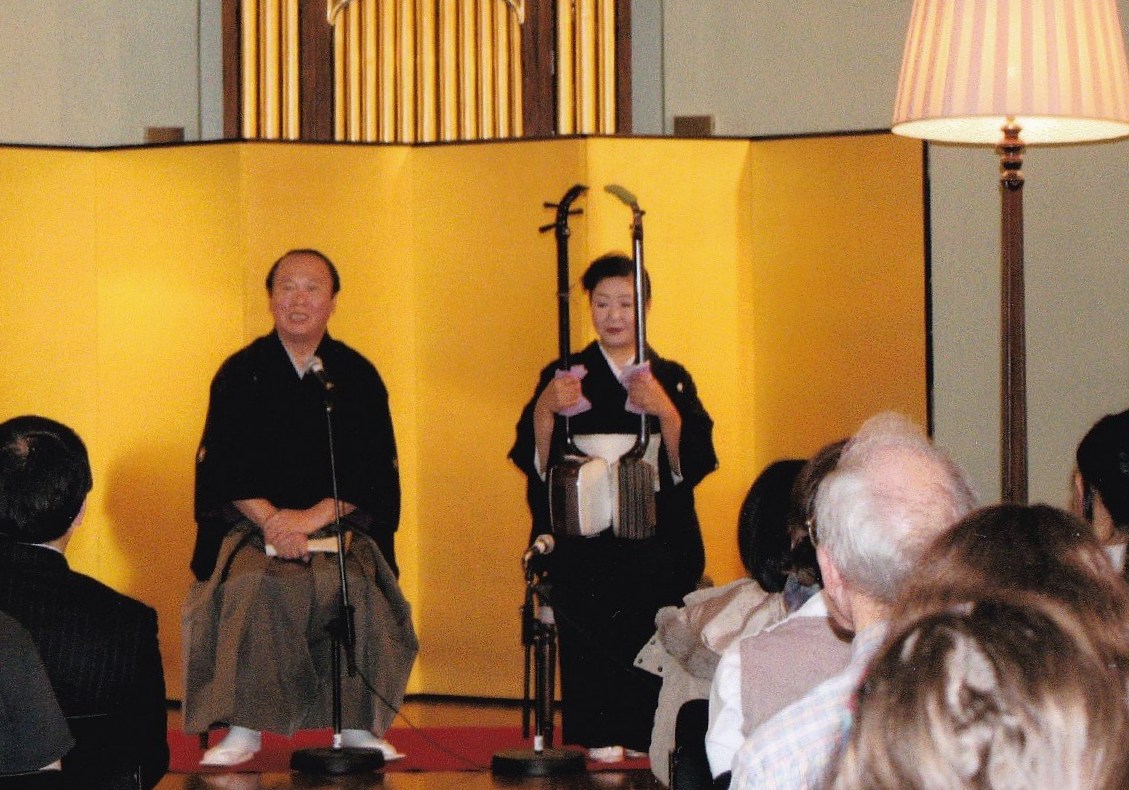 Before the concert at the University of Edinburgh

I stood up and bowed. The audience gave me enthusiastic applause and a standing ovation. I believe that they were expressing their appreciation and thanks for my effort and enthusiasm in performing a work by their beloved poet in shinnai style and in their own language. Frankly, I was delighted. I felt that this was mutually understandable goodwill diplomacy.
After the performance, a professor who specialized in Robert Burns’ poetry said to me, “I would like to stage a Robert Burns musical in Japan two or three years from now. The script is already finished. I would really appreciate your cooperation with this project.” Unfortunately, I never heard any more from him about that. I guess that he wasn’t able to implement his plan.
Incidentally, in English-speaking areas, Auld Lang Syne is sung on New Year’s Eve, just as we do in Japan.
After this visit, I felt respect for the history and arts of Scotland. I had a feeling that a good relationship had been established through music.
We then drove back to London.
Even though there always seem to be various difficulties during overseas performance tours, these tours give me experiences and excitement that cannot be obtained on a sightseeing trip. As a Special Cultural Envoy, I was expected to make all my own arrangements. I had to plan the activities that I would engage in while overseas and consider what was most likely to result in success. Now, looking back at these 45 days overseas, I realize that I have unforgettable pleasant memories of many valuable experiences.