Looking at Kagurazaka from Shinnai Alley (21)

Shinnai Overseas Performance Tours 12: England – Part 1
Sent Overseas by the Agency for Cultural Affairs as a Special Cultural Envoy Traditional and Proud Great Britain – Before It Left the EU

In order to help people around the world have a deeper understanding of Japanese culture, and to form and strengthen networks between Japanese and non-Japanese, the Agency for Cultural Affairs annually designates artists and cultural figures as Special Cultural Envoys. The Special Cultural Envoys come from a wide range of genres, and include performers of the Japanese traditional performing arts, performers of Western music, writers, players of go and shogi, calligraphers, ikebana artists, tea ceremony and incense ceremony teachers, designers of gardens, plasterers, dyers, taiko drummers, and performers who play shamisen in the Tsugaru style.
I was appointed as a Special Cultural Envoy in 2009. Probably I was chosen because, in my career, I had gone to many countries on performance tours. 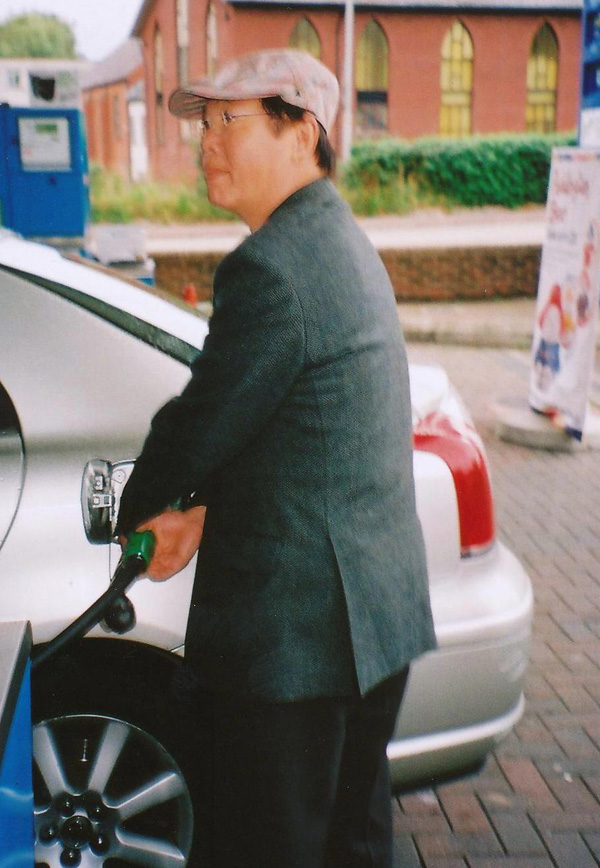 Gassing up the rental car

Those who were designated as Special Cultural Envoys could choose the length of their overseas stay, such as three months, six months, or a year, and could also choose where in the world they would go. Given this freedom of choice, I decided to go to the UK and to stay there for six weeks.
Right now, England is wavering between staying in the EU and leaving it. One reason that I decided to go to the UK in 2009 was because the daughter of one of my friends was studying at the University of London, and another reason was that for a long time, I had wanted to go there.
However, once the Agency for Cultural Affairs had selected the Special Cultural Envoys, all arrangements were left up to the Envoys. In a short period of time, I had to make all the arrangements for my accommodations, school visits, transportation, and so on. Fortunately, my friend’s daughter found a Japanese woman living in London who was willing to act as coordinator for my activities during my stay. I had to pay for her time, of course. She took care of all the arrangements for me. If I had not hired someone like her, I could not have managed this project.
In addition, one of my students, Tsuruga Isefani (an American woman), came with me for the entire period, and another student, Tsuruga Iseshige (a Japanese woman), joined us for the last 2 1/2 weeks. Both of them came at their own expense. Including Tsuruga Isekichi, the total group from Japan for this project was four people.
The main activity was workshops. We used three student shamisen. As shamisen can be disassembled into three parts (four, to be exact), they were packed together with plectrums in a large cardboard box, and sent to London from Japan.
The four of us, with our professional shamisen, our luggage, and the cardboard box of student shamisen and plectrums, traveled by rental car. We were based in London and, from there, we went to other places in England, as well as Scotland, Northern Ireland, and Ireland. I could drive there because, as in Japan, they drive on the left side of the road and the steering wheel is on the right. With the help of maps, we drove a good 4,000 kilometers on unfamiliar roads.
We visited a total of 18 educational institutions: ten elementary schools, six universities, a school for Japanese students, and a school for youth with disabilities. The program in all those places was more or less the same, consisting of a shinnai performance, workshops, and a lecture followed by questions and answers. 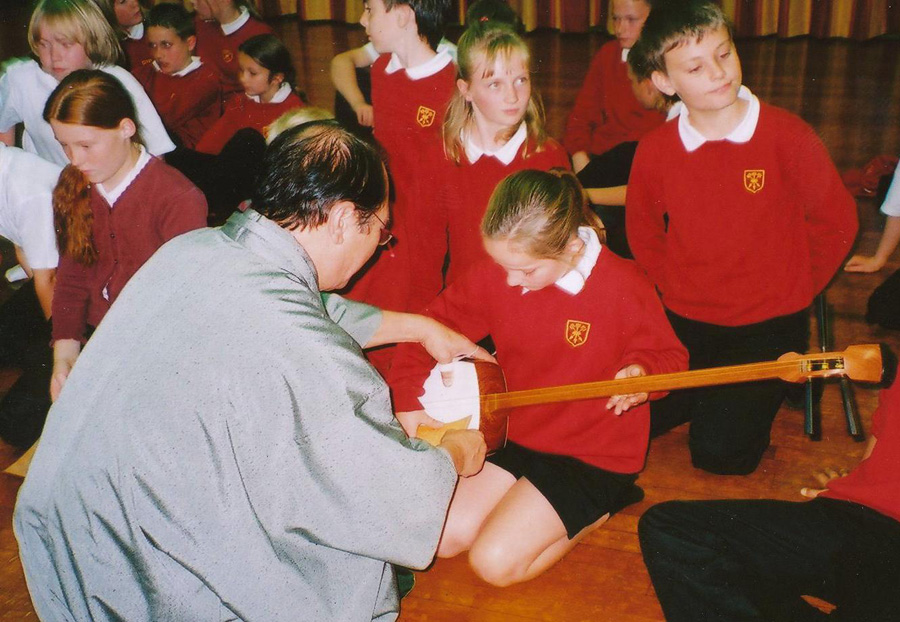 Shinnai workshop at an elementary school in England

Joururi (song) is impossible to teach in a short period of time, especially considering the language barrier. On the other hand, since musical instruments can be handled with enjoyment by anyone, I had the students try playing the shamisen. Each place we went, we were busy assembling and later disassembling the shamisen.
Each student was given only about one minute, but even in that short time, the students were excited to hold the shamisen and plectrum and, with them, produce an unfamiliar sound.
In addition, when I performed joururi, they listened wide-eyed, with blank looks on their faces.
At the end of each workshop, there was a question and answer session. There were differences in the questions from the elementary school students compared to the university students, but in all the workshops, the students asked a lot of questions enthusiastically, without hesitating. There was never enough time. However, I’m not sure if they understood joururi as a music form.
I explained various things about shamisen, such as what kind of wood is used to make the shamisen, and what the strings and plectrum are made of. Then I asked what material they thought was used for the skin covering the body of the shamisen. They called out answers such as “cowhide”, “horsehide”, and “rabbit skin”.
Because in Europe and the United States, animal protections are strong and many people treat their domestic animals like family members, I hesitated as to whether I should tell them that the material covering the shamisen is either cat skin or dog skin. At those times, I left it up to the teachers to decide what I should say.
As soon as I said, “This is cat skin. Dog skin is also used,” the children cried out, “Yecch” and “Ugh”. Some students were surprised; others made a face. Japanese children do that too, because many of them are not familiar with shamisen.
In the next several issues, I will describe some particularly impressive, pleasant, interesting, and exciting experiences that I had when, as Special Cultural Envoy, I visited the eighteen schools, gave concerts, and so on.