Looking at Kagurazaka from Shinnai Alley (15)

I’ve mentioned many times that almost all of my overseas performance tours were done in conjunction with the Hachioji Kuruma Ningyo puppeteers. However, as I haven’t yet provided an explanation of the Kuruma Ningyo puppets, I’ll describe their mechanism briefly. 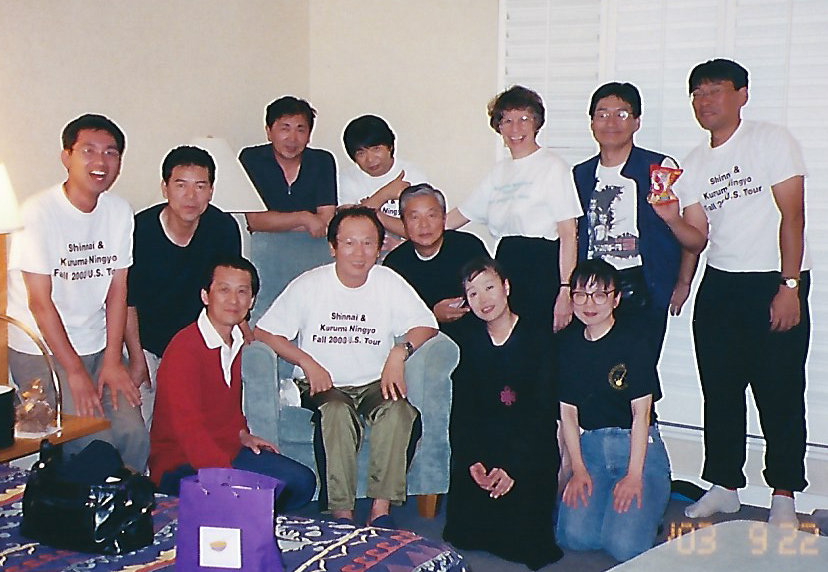 Shinnai and Kuruma Ningyo performers and staff in America

About 200 years ago, Nishikawa Koryu I originated the Kuruma Ningyo puppets in Iruma, in Saitama Prefecture. After that, many puppeteers made improvements in the puppets; some of them were helped in this by Bunraku performers. Finally, the puppets reached their present form.
At the start of the Meiji Era (late 19th century), Nishikawa Koryu II became the head of the troupe. They moved to Hachioji, which is a city in Tokyo; the troupe has remained in Hachioji since then.
Kuruma Ningyo puppets are the same size as Bunraku puppets. The distinctive difference is that whereas Bunraku puppets are each manipulated by three puppeteers, each Kuruma Ningyo puppet is operated by only one puppeteer, who is seated on a small wheeled box, called rokuro.
The puppet’s head and arms are manipulated by the puppeteer’s hands. Inverted T-shaped extensions from the puppet’s feet fit into the space between the big toe and the second toe in the tabi on the puppeteer’s feet.
The rokuro is very well designed; it can be moved freely in all directions, forward, backward, and to the right and left. The rokuro is a rectangular wooden box, 20 cm x 17 cm, and 25 cm high. Inside it, there are two narrow wheels in front and one broader wheel in back.
A kuruma is a wheeled vehicle, and ningyo means “puppet”. That is why this style is called “Kuruma Ningyo”. This kuruma is not a wheelchair.
The puppets’ heads and their costumes are works of art with a history of more than 200 years.
Because only one puppeteer manipulates each puppet, the puppets’ movements can be spontaneous and lively. Also, these puppets are the best for performance tours, because they are compact.
There will be a shinnai performance on September 6, 2015, at the Kagurazaka Theater. The Kuruma Ningyo puppets will be performing in that concert. Please come and enjoy the event. (Admission is free.)
My overseas performance tours generally include five people from the Kuruma Ningyo troupe and approximately four people who perform shinnai; typically there is a total of about ten people. We take with us as small an amount of stage properties and other equipment as possible.
Traveling with this number of people, I’ve been to America five times, performing in approximately twenty cities. 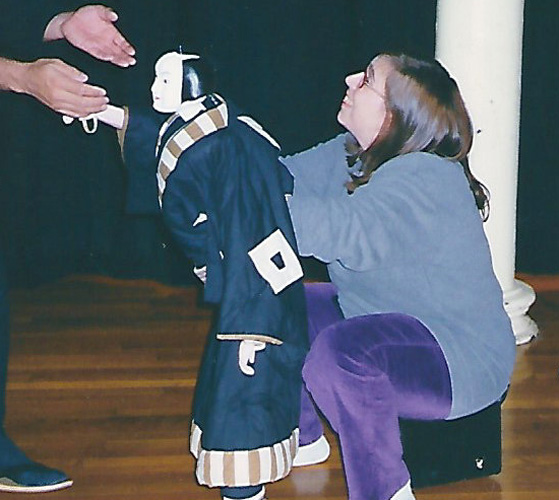 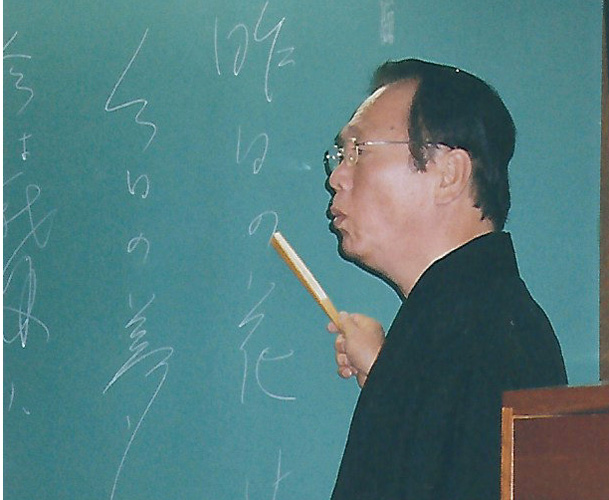 In the shinnai workshops, because it would be impossible for the students to do joururi (shinnai narration), we showed them how to hold the plectrum (pick) and the shamisen, and taught them how to use the plectrum to pluck the strings of the shamisen. The students were intrigued with the novelty of the shamisen, and told us that the workshops were fun. After that experience, when they heard our performance, their appreciation increased, and they were even more impressed.
We were well received at all the universities we visited, which made us very happy. However, at the world-renowned MIT, the students’ reactions were more moderate. Maybe that’s because they were all geniuses.
I believe that all students, both in the sciences and in the liberal arts, should maintain a good balance between their brain and their heart. I was brooding about many things, such as about people of ordinary ability and those with a different sensibility… and then we went to Princeton University.
Princeton University is a prestigious university, a leader among universities in America. The university sent a car to pick us up at our hotel in New York City and take us to Princeton. When the car arrived, we saw that it was a limousine. Well, that’s Princeton. I was more surprised than delighted. It was the first time that just the shinnai group had ridden together in such a big car.
At Princeton, rather than doing a performance for undergraduates, I lectured and performed mainly for professors, including many Japanese professors. The event was held in a classroom so, instead of simply performing shinnai, I wrote the words of a famous shinnai work on the blackboard, and then, as I performed it, I pointed to each word. I enjoyed performing for professors of a famous university. I appreciated very much this meaningful opportunity to publicize shinnai.
1511173.jpg Narrating shinnai in a Princeton University classroom
The dinner that evening was the best.