Looking at Kagurazaka from Shinnai Alley (14)

After I was designated as a Living National Treasure in 2001, I was extremely busy attending congratulatory parties not only in Tokyo but also elsewhere in Japan. Furthermore, I gave many performances. Finally, in October of that year, I had a physical breakdown from overwork.
Also that year, the Kagurazaka Shopping Street Promotion Association awarded me the title of Honorary Member. So far, I haven’t made what I feel is a satisfactory contribution to the Association, and I’m sorry about that. However, whenever I perform in Japan and also overseas, I include something about Kagurazaka in my self-introduction, which gives Kagurazaka a little advertising. 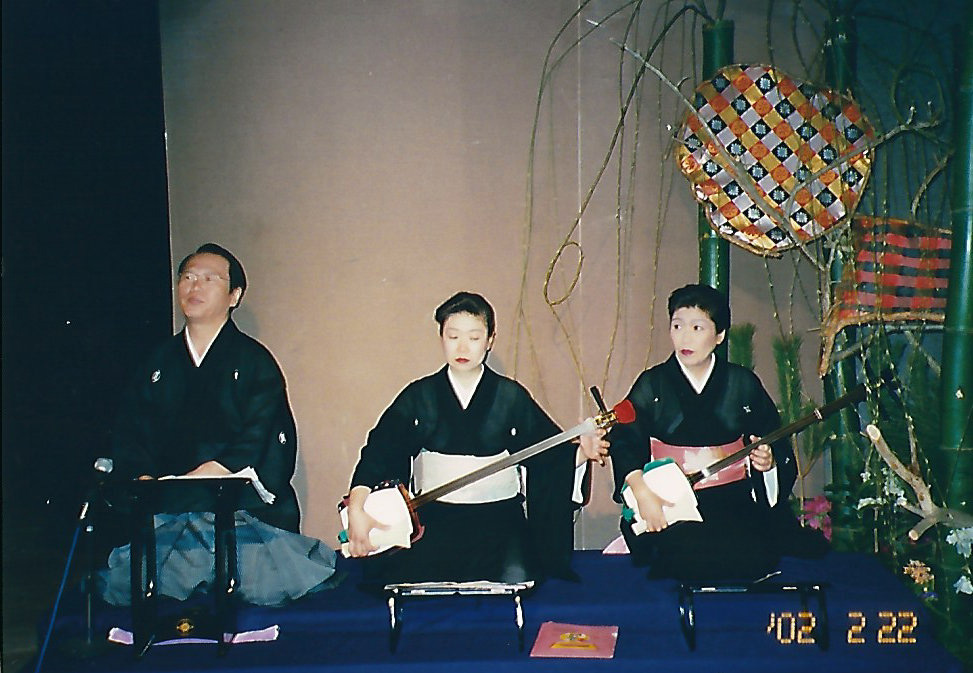 After my health recovered somewhat, I pushed myself to start overseas performance tours.
The Hachioji Kuruma Ningyo Troupe accompanied me on most of these tours. Audiences of non-Japanese can understand shinnai more easily when seeing as well as hearing the stories performed.
However, these trips were dangerous.
The first of these tours, in February, 2002, was to Saipan, where we performed for high school students. The performances were almost entirely in Japanese, and must have been difficult for them to understand.
There were fierce battles on Saipan during World War II, and many people died there. However, during our visit in 2002, we were able to communicate in a friendly way with the high school students and other local people. But when we were taken to Banzai Cliff, I felt intense sorrow in my heart. We all prayed for the souls of the dead. It seemed to me that Saipan was not a place for people of my generation to go sightseeing.
As soon as the performances were finished, we returned to Japan. 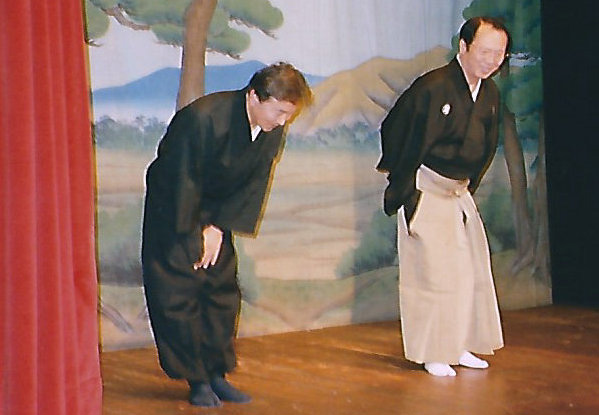 In the summer of that same year, even though my physical condition was still not good enough for an overseas tour, I reluctantly went to America because the tour had already been scheduled.
This time, too, the Kuruma Ningyo Puppet Troupe came with us. On this trip, because I was not confident about my health, I brought with me a cassette tape recording of the works that we were planning to perform in case my health condition did not permit me to appear on stage.
The first performance was in Seattle, and already the tape had to be used. In my dressing room before the performance, I felt dizzy. When I measured my blood pressure, I found that it was rather high, probably because of fatigue from the long trip from Japan to Seattle. I was in no condition to perform.
The evening before, we’d gone to a Seattle Mariners game. I wonder if that might have been bad for me, in my condition.
One of my students, whose shinnai name is Isefani (real name, Stephanie), came along on this trip. She was acquainted with the owner of the Mariners, and had arranged for us to be invited to see Ichiro play. During the game, on the big announcement board, WELCOME WAKASANOJO suddenly appeared. Maybe I was too excited when I saw that, and it might have worsened my health condition.
Next, we went to San Antonio. There, my health condition got even worse, and I was concerned that I might have to be hospitalized.
San Antonio is close to Mexico, and Spanish is the main language.
Now, I no longer remember the name of the theater, but I remember that I was able to perform there, although just barely.
The main work that we performed on this tour with the Kuruma Ningyo Troupe was a comedy, the Akasaka Namiki part of Yaji-Kita. I included only a little English in my performances, and I wasn’t sure how well the audience could understand the story. However, what the puppets did was so funny that the audiences laughed a lot, so they must have had a rough understanding of the story.
Later, I gradually increased the amount of English, and eventually created an American version of Yaji-Kita. 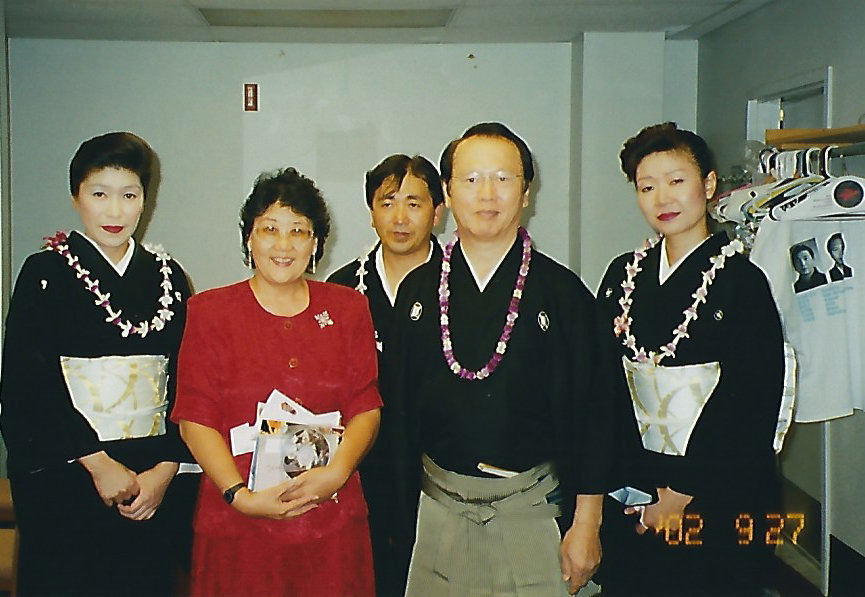 After a performance in Hawaii

From the mainland, we traveled to Hawaii. As my health had still not recovered, I was concerned as to whether I could perform on four islands as scheduled. I was able to perform, just barely, on Oahu, but the Kuruma Ningyo Troupe had to perform with the recorded tape on Kauai, Maui, and Hawaii islands. Because we got no complaints from the audience and they seemed to be satisfied, I was a little disappointed.
We had bad luck in our choice of restaurants. I was dissatisfied because we didn’t get to eat any especially delicious food.
More than 10 years later, when my health was much better, I went back to Hawaii.
When I’m healthy, overseas tours are delightful, but they’re not so pleasant when I don’t feel well…