Looking at Kagurazaka from Shinnai Alley (29)

When I went to Spain in 2017, it had been twenty years since my previous trip there. This time, Spain was in turmoil because of the issue of Catalan independence.
Historically, Spain has gone through an unusual amount of major transitions. Traces have been found of human habitation dating back more than 1.2 million years. In the cave of Altamira in northern Spain, there are remains of paintings executed more than 35,000 years ago. Moreover, Spain’s territory has been repeatedly invaded and occupied by people of many different ethnicities. What is particularly interesting is the strong influence that remains on Spanish culture of nearly 800 years of Islamic rule. 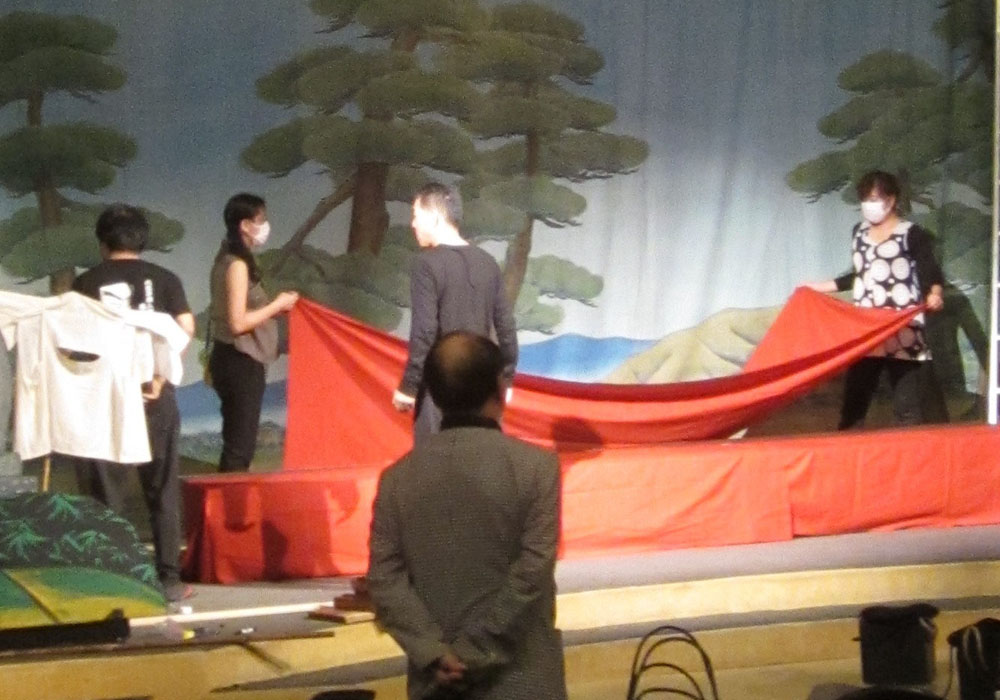 Performers setting up the stage

Because of the conflicts in Barcelona, our performance was held in Madrid, the capital of Spain.
There were eight performers on this tour: three shinnai performers, one traditional Japanese dancer, three puppeteers from the Hachioji Kuruma Ningyo troupe, and one guitar player. The program included works that are staples of my overseas performances: the shinnai Ran’cho, the dance number Hiroshige Hakkei, and Yaji-Kita, done jointly by shinnai artists and the Kuruma Ningyo puppets. This time, besides the standard repertoire, a guitarist was added.
We left Japan from Haneda Airport, spent five hours in transit at the Frankfurt Airport, and finally arrived in Madrid. I went to bed as soon as I got to my hotel room. It was around 1:30 p.m. The next day, from my window, I saw the glorious morning sun over the top of the spire of a church across the street from the Prado Museum. 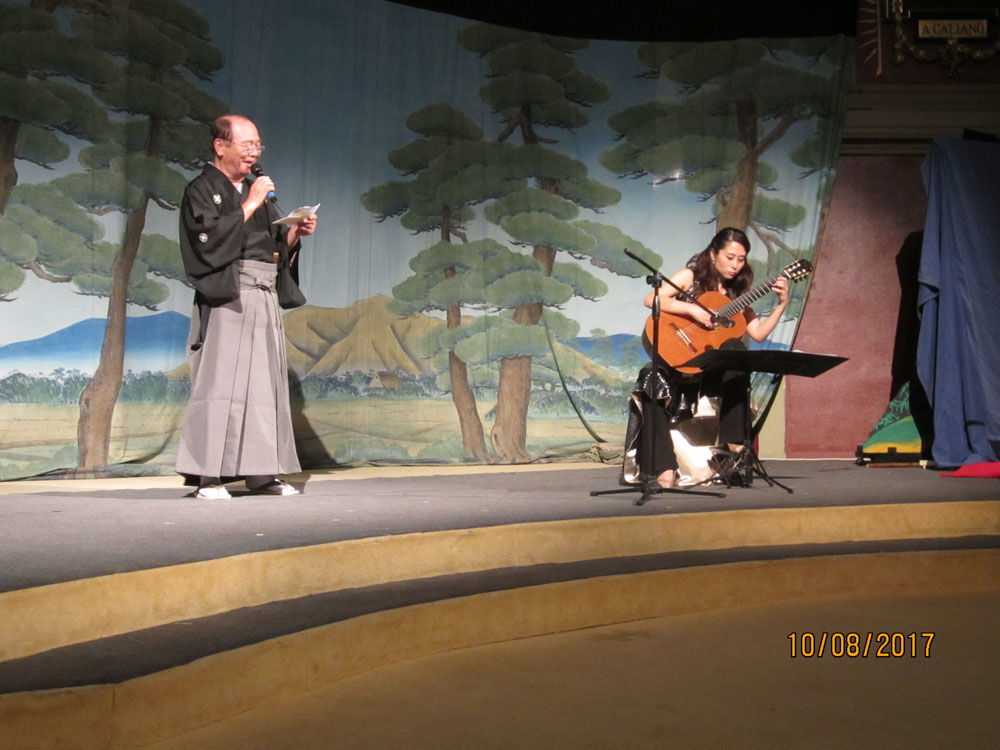 Singing an encore in Spanish

That day, we had a rehearsal at the venue. The performance was to be held in the theater of the Ateneo de Madrid. The Ateneo de Madrid building had a medieval atmosphere. I was really thankful that the venue was five minutes’ walking distance from our hotel.
The stage was so simple that it was difficult to set up the backdrops and props that we’d brought from Japan. However, the Kuruma Ningyo puppeteers are used to this kind of situation, and they made all necessary preparations skillfully. The staff of the venue were amazed and impressed.
Generally speaking, for both domestic and overseas concerts, performers do not get involved in the jobs of lighting, sound, props, changing the scenery, and so on. Rather, those jobs are handled by specialized staff. For Kabuki and other kinds of plays, a large staff is needed. However, on my performance tours, I take only a minimal number of people, so the performers have to do the work that’s usually done by such staff. Most of my overseas performances have been done that way. .

Finally, it was time for the performance. The capacity of the venue was about 350 people. The performance was sold out in advance. We were told that quite a few people had had to be turned away. Everyone said that it was a shame that there was only one performance.
The first number was Ran’cho. Second was a beautiful Japanese traditional dance performed to the shinnai piece, Hiroshige Hakkei. The lyrics for both of these works were delivered in Japanese, but because of the explanation in the printed program and a brief summary in Spanish given by the MC prior to the works being performed, the audience mostly seemed to understand them.
Third, the Japanese guitarist played several pieces. The audience enjoyed these classical guitar works, which are different from flamenco.
Next was Yaji-Kita, which is a collaboration of shinnai with the Kuruma Ningyo puppets. I did most of the spoken dialogue in Spanish. It’s a comedy, and the audience laughed a lot. I’ve performed shinnai in Spanish many times in South America. Was my Spanish understandable? Humorous works fall flat if the people in the audience don’t understand the contents of the story.
For this event, I prepared some encores. First, accompanied by the guitarist, I sang Kojo no Tsuki in Japanese and then in Spanish. 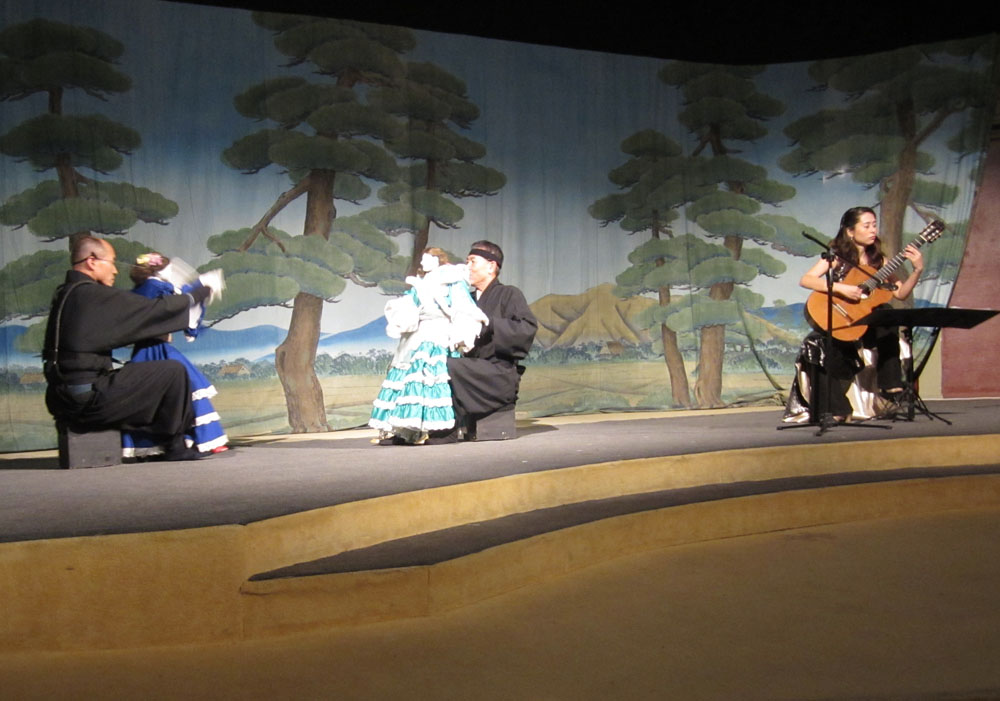 Flamenco encore by the puppets and the guitarist

Then, Hanayagi Kihi, the traditional Japanese dancer, came on stage, still dressed in kimono, and did a flamenco-like dance to this song. She got the biggest applause of this concert.
The Kuruma Ningyo performers had brought two puppets dressed as flamenco dancers, and they danced to an excerpt from Carmen, played by the guitarist. This, too, pleased the audience.

I firmly believe that this kind of cultural exchange deepens the ties of friendship and understanding between countries.
The program concluded with a traditional Japanese hand-clapping ceremony.
The Ambassador from Japan to Spain and his wife stood to express their appreciation.
The performance was a great success.
The weather was fine every day that we were in Spain.
I am sincerely grateful to the Information Development Co., Ltd. (ID), whose staff were responsible for the planning and promotion of our performance.
In the Kagurazaka Community Magazine up to now, including this issue, I have written about having given concerts in over 30 countries and about my experiences on those tours. Although, due to the space limitation, I could not write in as much detail as I would have liked, I am now, with this issue, concluding this series of essays about my overseas performances.
Starting in the next issue, I will write about shinnai joururi and about some sayings related to the performing arts.
(From Kagurazaka Community Magazine, Dec. 2017 – Jan. 2018, issue #95)