The Massive Disaster in Japan and Performing in Poland (1)

We tend to forget past natural disasters. No! Japanese never forget.

Japan is a country of disasters. Every year, every year, there are earthquakes, typhoons, and floods in many parts of the country. But this time, the disaster was more enormous than anyone could have imagined, far beyond people’s expectations.

Nature’s great power is beyond people’s imagination and ideas. On the basis of data from the past, people can only guess what might happen.

Nature’s blessing and nature’s anger are in God’s realm. In other words, there is nothing that people can do. In the natural world, human beings’ power is futile. However, it is possible for people to minimize the bad effects.

Would it have been possible to do that in this recent disaster?

From now on, the most important thing is to think about prevention, and to use the data and knowledge from this experience as much as possible within our limitations as human beings.

In World War II, the firebombing of Tokyo occurred on March 10, and it was in the afternoon of March 11, which is, of course, the next day, that this latest great disaster happened.

We in Japan face the most serious crisis since the war. It is an awakening of the Japanese spirit. 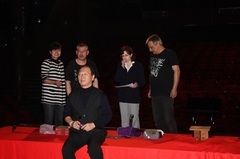 Group meeting at the theater in Warsaw

It was two days after the earthquake, on the 13th, based on a plan made last year by the Japanese Embassy in Poland, that I flew to Warsaw to perform concerts being held in commemoration of the 200th anniversary of Chopin’s birth. I want to give a simple report about that here.

When I went to Narita airport, my feelings were very complex. On the previous day, all flights had been canceled, and I thought that maybe the cancellations would continue on the 13th. We were able to drive on the expressways to the airport, because the roads had re-opened. The Finnair flight departed on schedule.

I was worried about Japan and the family members whom I had left behind. But at both locations where we were to perform in Poland, the tickets had already been sold out, so as a performer, and as a Japanese, I couldn’t cancel… The eight of us, thinking those same thoughts, left Japan behind us.

We changed planes in Helsinki, and finally landed in Warsaw.

I had expected it to be extremely cold there, but on our arrival, it wasn’t so cold. We were relieved about that.

The next day, after lunch, we met at the concert hall with the local staff, in order to prepare the lighting, sound, and props. After that, we were going to start our rehearsal.

A staff member from the Japanese Embassy arrived with a mournful expression. Her message was that we had been ordered to cancel the performance. The reason was that the Foreign Ministry had sent instructions to all the Japanese embassies in the world, telling them to cancel all the cultural events that they had planned for the time being (but with no information about when they could resume them). 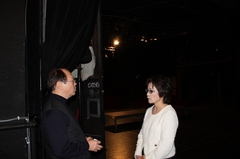 But why… It would have been all right if it had been done as a charity event… The eight of us were disappointed. But there was nothing we could do about it, and we sadly left the stage.
Because the performance on the 15th was canceled, we didn’t feel very cheerful, but even so, we did a little sightseeing in Warsaw.

Warsaw was destroyed by the German Army in World War II, and nothing remained of the city. This is the same as the current situation in northern Japan, where towns on the Pacific coast were totally destroyed by the giant tsunami. Warsaw was rebuilt by the great effort of the people of the city, and little by little is recovering. Nowadays, almost all of the city has been reconstructed. However, even now, the reconstruction continues. 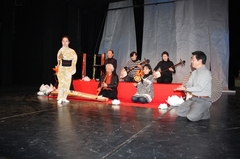 Performing after finding out about the cancellation

The cancellation of the Warsaw performance was unavoidable, but because we were told that it would be possible to hold the performance in Krakow, our spirits were renewed, and the next morning, we took the train to Krakow. Riding in a compartment in a train for the first time in a long time, I arrived in Krakow.