The Massive Disaster in Japan and Performing in Poland (2)

Krakow is 300 kilometers south of Warsaw. It’s an ancient city, similar to Kyoto.

Soon after we arrived at our hotel, we went by car to Auschwitz. Before this trip to Poland, I had asked especially to have a chance to see Auschwitz.

At Auschwitz, we saw that, even now, buildings where the genocide occurred are still standing. This was the location of the worst tragedy of the twentieth century, in which innocent Jews and Poles were arrested and taken to be killed in the gas chambers. People were packed into cattle cars on trains, not knowing where they were going.

The mournful railroad tracks are still there. This place was the terminus for the train and for the lives of those people, too. Most of them went directly from the train to the gas chambers. Cute, innocent little children, too….

On display in the concentration camp buildings are many belongings of the prisoners. Plain wooden beds in a building like a stable, simple toilets in a row, torture chambers, gas chambers, a barbed wire fence, guard towers–even now, the hellish atmosphere of these buildings was hair-raising.

Why did human being do such terrible, evil things? Their actions were too unreasonable, too cruel. For what kind of purpose could God have allowed such actions? From the beginning of time, people have committee atrocities such as these.

We went back to our hotel in Krakow with mournful expressions. 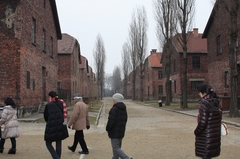 In Japan, there had been a tremendous amount of destruction, and we were relieved to hear the news that the Krakow performance could be held. As I had expected, the performance would be held as a charity event.

Every day, there was news about the massive earthquake and tsunami disasters in Japan. Our group’s visit was also written up in the newspapers, featured on television, and so on, and, in addition, I was interviewed by TV and newspaper reporters.

As a result of this coverage, when the day of the concert arrived, many people rushed to the hall, and the place was full. 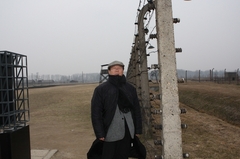 The performance was held at the Manggha Centre of Japanese Art and Technology, which was designed in 1987 by a Japanese architect named Arata Isozaki for the purpose of introducing Japanese art and technology. “Manga” was the title of a series of ukiyoe sketches by Hokusai. “Manggha”, a transliteration into Polish of the Japanese word, was the pseudonym adopted by a wealthy collector of Japanese art in the early 20th century.

At Manggha Museum, we could understand how deeply Poles are interested in Japan.

The organizing theme for the concert was “the beauty of Japanese traditional music and dance”.

I was the head of the group visiting from Japan and performed shinnai joururi (narrative song). Tsuruga Isejiro and Shinnai Katsushizu played shamisen. Traditional dance was performed by the deputy head of our delegation, Fujima Jinsho, and by Hanayagi Kihi. Tomimoto Seiei played koto; the shakuhachi player was Yoshioka Tatsumi. Tou’sha Akane performed on traditional Japanese drums called ko’tsuzumi and o’tsuzumi. Our group was a total of eight people.

The four works we performed were: Ran’cho, a shinnai su joururi work; Yuki, a dance number with shinnai music, danced by Hanayagi Kihi; Banzai, a ji’uta work danced by Fujima Jinsho with vocal and koto music by Tomimoto Seiei, shakuhachi by Yoshioka Tatsumi, and traditional drums by Tou’sha Akane. The whole group of us performed Kumo no Ito (The Spider’s Thread), which I have adapted for the stage from a famous work by Ryunosuke Akutagawa. I designed the production, as well as writing the music and the libretto.

Because this event was held in commemoration of the 200th anniversary of Chopin’s birth, I chose rather more quiet and serious works.

Poles like Japan very much. They study and understand the Japanese cultural arts very well. Polish and Japanese people’s temperament and sensitivities seem to resemble each other. Although this first visit to Poland was very short, I got that feeling. I felt very close to them.

I was satisfied with my selection of the works to be performed. At the concert, supertitles were not used, but the audience (99% of whom were Polish) seemed to understand the contents of the works correctly. I realized this at the party held after the performance. Their hearts were moved by our performance. I’m sure that the event was a big success.

Andrzej Wayda, a world-famous Polish movie director who has many fans in Japan, had been looking forward very much to seeing our performance, and he was very disappointed that the Warsaw performance was canceled. In his place, his wife, Krystyna Zachwatowicz, a theatre costume designer and actress, came to Krakow. She was moved by our performance, and complimented us. We were touched by her reaction.

(continued in the third installment)