Bordeaux, the City of Wine, Drunk on Shinnai

After a comfortable train trip through an unchanging rural landscape, we arrived in Bordeaux.
The hotel was located near the train station, which was convenient. The rooms and other facilities, and also the hotel staff, were about the same quality as in Paris. We’d got used to this by now. Bordeaux has trams running through the city, which was convenient. We could get around easily without having to use taxis.
Bordeaux is world famous for wine. It’s located on the Garonne River, about 100 kilometers upstream from where the Garonne flows into the Atlantic Ocean. It’s a quiet town, without any tall buildings. I’d heard that there were hundreds of chateaux in the area.
Although my main purpose in going to Bordeaux was for a shinnai performance and not to drink great wine, I had high expectations for the wine. But first, of course, we had to perform.
The venue was about 20 minutes’ drive from the city. It was a kind of public studio stage where performances were held that were aimed mainly at young people. I thought that it wasn’t particularly suited to the Japanese traditional performing arts, but even so, the place had an interesting atmosphere. 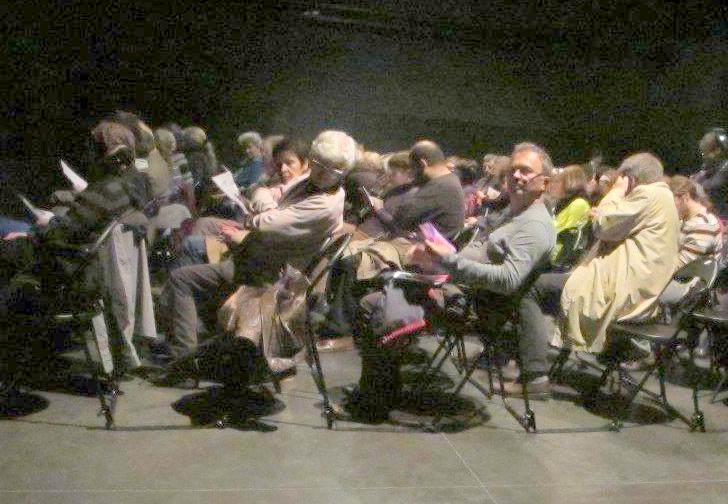 Waiting for the shinnai performance in Bordeaux

The performance in Bordeaux had been arranged by the Japanese Embassy in Paris, and we were accompanied to Bordeaux by two staff from the Embassy. Actually, it was the Honorary Consul of Japan in Bordeaux who first contacted me about performing there. But he didn’t seem to be particularly interested in Japanese traditional performing arts, perhaps because he didn’t know much about them or perhaps because he didn’t understand them. I thought, “I suppose that must be something of a problem for him”.

After the performance and curtain calls, the audience had many questions, as they do everywhere that I perform.
The next day, our group joined a bus tour so that I could realize my dream of visiting some chateaux. 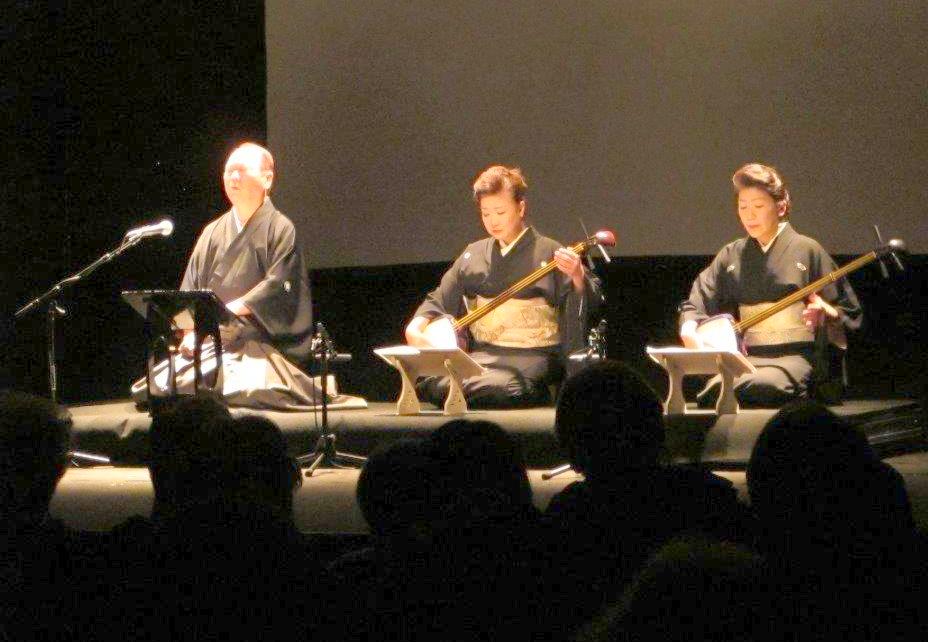 The tour took us to two small, family-managed chateaux. At each one, staff of the chateau gave the tour group a very long explanation in English. I don’t understand English, so this was very boring for me. One of the chateaux we visited specializes in sauterne, which is a sweet white wine. I thought that it was delicious. But at the other chateau, which produces red wine, we were served cheap, young wines that didn’t suit our taste. Overall, the tour was disappointing, nothing like what I’d anticipated. All of us concluded that it would have been better if we’d gone to the five major chateaux.
That evening, for the last dinner of this performance tour, we went back to Gabriel, the French restaurant that we’d gone to when we were in Bordeaux in June. The food and wine at Gabriel were wonderful, and I was quite satisfied. My fatigue fell away, and I felt that it had been worthwhile coming to Bordeaux.
But our trip to France did not have a happy ending. Our return route took us by TGV from Bordeaux to Charles de Gaulle Airport. Again, we had a hard time.
What happened would be impossible to imagine happening in Japan. When we got to the Bordeaux train station, we found that the track that our train would depart from had not yet been announced.
The five of us, with our suitcases and other belongings, waited at the entrance to the train platforms. 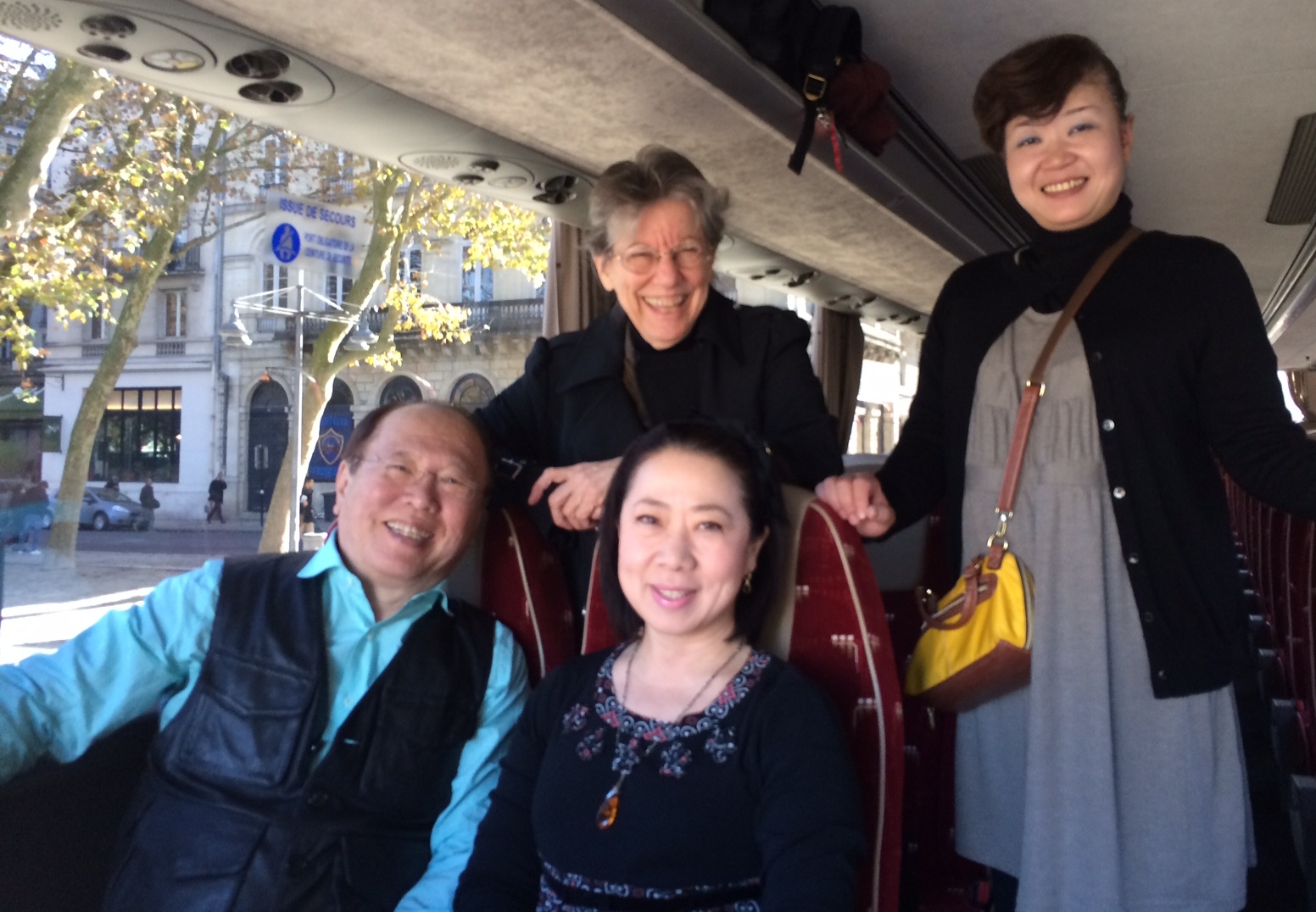 On the tour bus before visiting the chateaux

French trains seem to always be late, without any notification as to when they could be expected to arrive. As soon as the track for our train was posted, we ran to the train, but it was difficult for us to find the car where our reserved seats were. Dragging our big suitcases, we went back and forth. We couldn’t find any station staff to assist us, and I got very upset. Even the youngest members of our group were in a sweat. I was so angry about this sloppy system that my blood pressure went up.
Well, wherever I’ve gone in the world, this kind of problem is ordinary. I wonder whether Japanese society might be too kind, too polite, too clean, and too nervous.
Maybe life here is too convenient… And I suppose that the food is too delicious. It’s possible that it would be easier to live in a place that was somewhat less controlled. Thinking about this, I wonder whether it is difficult for us Japanese to tolerate any inconvenience and lack of a sense of responsibility because we are always living in surroundings that are too comfortable. Maybe all that comfort weakens us mentally and physically. But there’s got to be a limit to how broadminded a person can be…
Still, I think that Japan is a wonderful country. Many Japanese have a world of complaints about life in Japan, but if you look at life in Japan overall, I think that it’s the best country in the world. I’m proud of my country and of the wonderful, talented people in it. I always have that feeling whenever I come back to Japan. However, definitely, I want to perform overseas again.