Under Paris Skies: The Sound of Shinnai Flowing Through Paris

When we returned to Paris in November, unlike our preparatory visit in June, we took heavy clothing, expecting fairly cold weather.
This time, our hosts picked us up at the airport with a medium-sized bus, and we arrived in central Paris without any problems.
Our group was eight people, including three shinnai performers, one traditional Japanese dancer, two puppeteers from the Kuruma Ningyo troupe, a lighting specialist, and an assistant. We went straight to the Maison de la culture du Japon à Paris (the Japan Cultural Institute in Paris).
The assistant was Stephanie (shinnai name: Isefani); she had also participated in the preparatory visit in June. Stephanie has often accompanied my overseas performances, and has helped a lot as interpreter, stage hand, my assistant, and so on. I’m really grateful to have a student who can help me in so many ways. Furthermore, she always participates in these trips at her own expense.
As soon as we arrived at the performance site, without taking any time to rest, we worked hard to prepare the lighting, check the stage system, and so on.
The Maison de la culture du Japon à Paris is located very close to the Eiffel Tower, near the banks of the Seine. 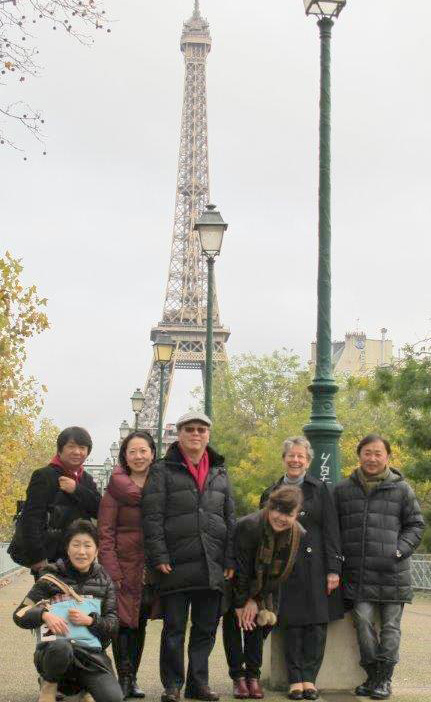 Performers and staff in Paris

We were put up in a hotel that was convenient for us, because it was very close to the Maison de la culture du Japon à Paris. Hotels in Paris are small and expensive. Even a three-star hotel there is not as good as a Japanese business hotel. The toilets in the rooms didn’t include a bidet. The elevator was small and inconvenient, and the staff at the front desk weren’t well trained.
Wherever we went, if we ate in a cafeteria, the food was terrible and expensive. We shouldn’t have expected so much in this city. All of Paris isn’t like that, but even though it’s a tourist destination, I realized that there were many unsatisfactory aspects to it. Japanese who were living in Paris told us that, frankly speaking, the food there wasn’t good, and we shouldn’t expect so much. I suppose that the top restaurants probably serve delicious food.
To return to my explanation about our reason for being there, the performance was scheduled to start at 8 p.m. the following day. From that morning, we were very busy with preparations and rehearsals. We could only afford to have one staff person, so all of us had to do our individual preparations by ourselves. At my age, it was pretty tough.
Then, the performance started. The main part of this performance was shinnai joururi.
Would shinnai be accepted by Parisians? Would they understand it? How many people would come to the performance?… While I was worrying about those matters, the performance started.
The program was opened by Ms. Sawako Takeuchi, President of the Maison de la culture du Japon à Paris. She greeted the audience, and gave them some explanation about shinnai. That was followed by my performance of Rancho.
Although the audience area was darkened, from where I was on the stage, I could see up to the last row. The theater was almost full. What a relief! I’d been more concerned about that than I had about my performance.
The second number was Hiroshige Hakkei, with joururi by Tsuruga Isekichi and shamisen by Shinnai Katsushizu. 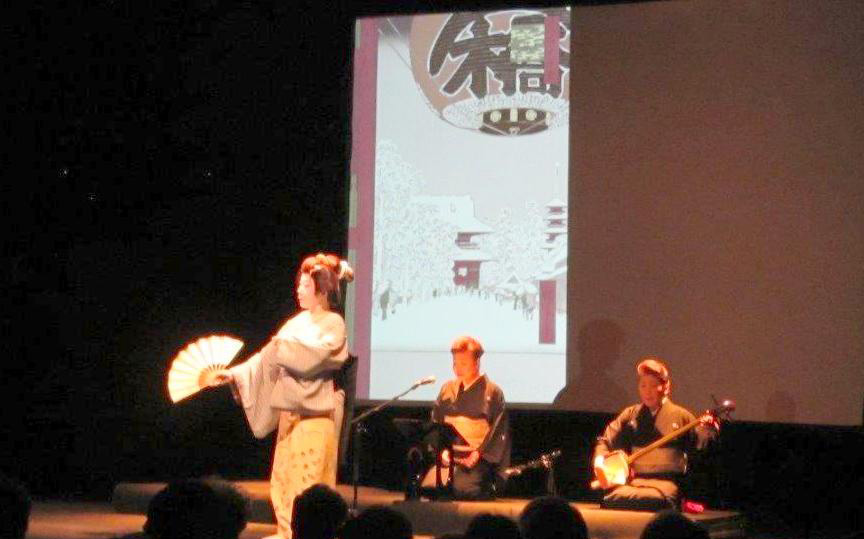 The Japanese traditional dancer, Hanayagi Kihi, had had to do all her preparations by herself, including putting on her stage makeup, dressing in kimono, and putting on her wig. For one person to do all that is very difficult, and two women helped her to dress.
I performed the third number, which was Ichinotani Futaba Gunki. I divided it into two parts. The first part was su’joururi (classical shinnai); in the second part, Nishikawa Koryu and Nishikawa Ryuji of the Kuruma Ningyo troupe performed the roles of Kumagai Jiro and Tamaori Hime, while I did the joururi.
All the artists performed energetically, doing joururi, playing shamisen, dancing, and so on, showing no signs of tiredness. I was impressed with the strength of these professionals.
The last number was finished. Well, how did the audience react? We got a lot of applause, and, even though there was actually no curtain, we were given a curtain call. Almost everywhere we perform overseas, we have curtain calls. However, this time, I was especially moved. I think that everyone in our group had the same feeling.
Under Paris skies, the sound of shinnai was flowing through Paris. I was delighted.
We gave two performances in Paris. The second one, too, was well accepted by the audience.
I had the same good feeling at the post-performance reception in the theater lobby.
At both performances, about 80% of the people in the audience were French. I’d been worried about their reaction, but after we got back to Japan, I heard that the comments from the audience were favorable. It was too bad that we didn’t use French supertitles. The audience, too, pointed that out in their comments on the performance-evaluation questionnaire.
On the second day, Ms. Takeuchi kindly prepared rice balls and hamburgers for us. That was terrific. I’d felt as if I were starving, and this delicious food revived me.
Coincidentally, an exhibition of Hokusai works was being held at the Grand Palais National Galleries. When we happened to pass by the building, we saw a long line of people waiting to get in. Paris was having a Japan boom.
After the second concert, the Japan Embassy in Paris held a banquet to celebrate the success of the performances. Our group of eight and around ten of our supporters from Japan were invited. We enjoyed a delicious Japanese meal and fine wines. Suddenly I realized that it was 1 a.m. We all appreciated His Excellency, the Ambassador’s gracious hospitality.
The following day, there was an international convention of Relais & Châteaux at the Embassy. Relais & Châteaux is an organization like Michelin that ranks hotels and restaurants around the world. The group has very high standards, and only a few places in Japan are included. The organization is well known and highly regarded.
Mr. Saito, one of my friends, is the owner of a famous Japanese inn called Myojin-kan, which is located in Tobira Onsen (hot spring) in Matsumoto City in Nagano prefecture. My friend’s son has been appointed as the branch manager of Relais & Châteaux in Japan and Korea.
As we happened to be in Paris just when a Relais & Châteaux international convention was being held there, we were asked to perform Sanbaso, a shinnai celebratory work, prior to a dinner held for the delegates at the Ambassador’s residence. The aim of the evening was to show off Japanese cultural arts and cuisine. The guests were from more than fifty countries. It was a good opportunity to showcase Japanese classical arts. 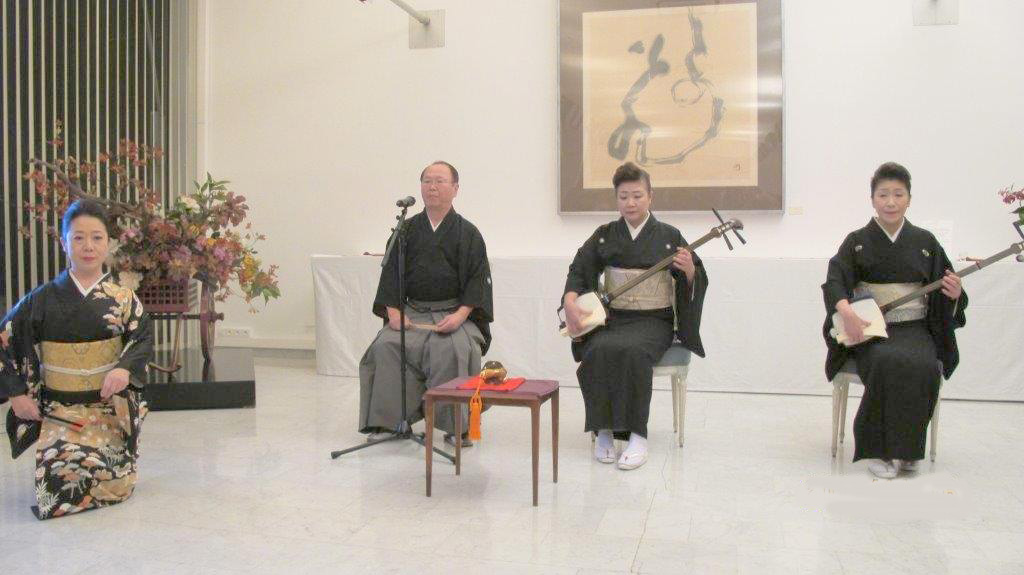 Later, the Ambassador e-mailed me that the guests had been very pleased with our performance, perhaps because of its novelty to them.
That evening, we went with Ms. Sawako Takeuchi, President of the Maison de la culture du Japon à Paris, to a French restaurant in the Montparnasse area called Le Clos Y. The owner-chef was Japanese.
The dishes were French cuisine in the style of Kyoto. Everything was very delicious, and the price was reasonable. We were told that the restaurant was very popular with Parisians. The chef combines a delicate Japanese sensibility with wonderful taste, and so French people too are captivated.
Then, the next morning, we took the French high-speed TGV train to Bordeaux for the concluding performance of this tour.