Under Paris Skies: The Sound of Shinnai Flowing Through Paris

I went to Paris in June, 2014, for the first time in ten years. The purpose of the trip was to plan and make arrangements for my performance tour of France that was scheduled for the following November. I was accompanied by Ms. Kihi Hanayagi and my student Stephanie. 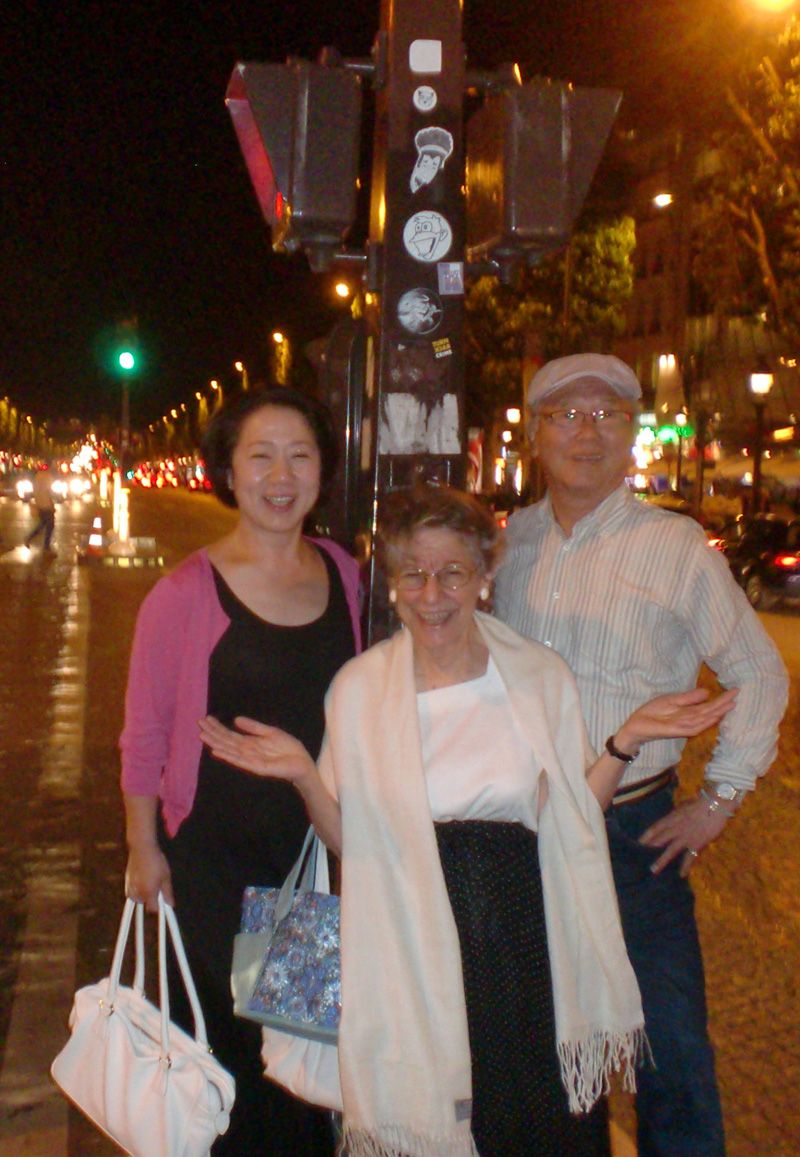 On the Champs Élysées

Paris hadn’t changed much since I was there before, perhaps because, unlike Tokyo, there are restrictions on the building of skyscrapers.
We went to the Maison de la culture du Japon à Paris, the place in Paris where the November performances would be held, and, with their staff, discussed details about the stage, the facilities of the theater, and the contents of the shinnai program. 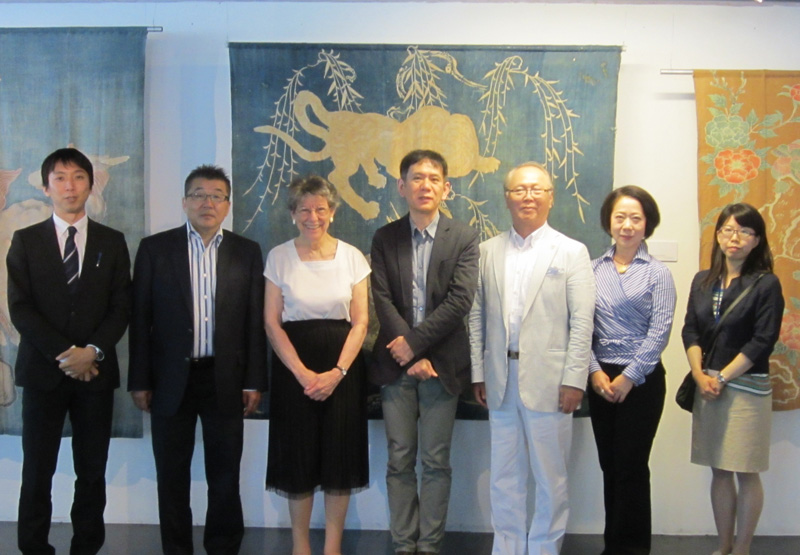 Because there were no performances, the trip should have been relaxed and pleasant, but instead, we had some very bad experiences.
On the first day, when we arrived at the airport in Paris, we had a big problem. After we got our suitcases at baggage claim, we looked for a place where we could get a limousine bus to the city. But there were no buses or taxis in sight. When we asked what was going on, we were told, “The taxi and bus drivers are on strike today.”
Well, we were stuck. We didn’t know how to get to our hotel. When we asked what we should do, we were told that we could get to our hotel by train, but that we would have to change trains several times. We struggled with our big suitcases, and got to the subway station dripping with sweat. The escalators weren’t working, and we couldn’t find any clear guide about how to change trains. It was terrible.
When we finally got to our hotel, we were completely exhausted. This was a private trip for the three of us. The purpose was only to make preliminary arrangements, yet our time in Paris had started with difficulty.
However, the two women traveling with me were strong and helpful.
June is a good time of year in Europe. During our stay in the beautiful city of Paris, I had good weather, as usual. The skies were always clear. Every day was comfortable. 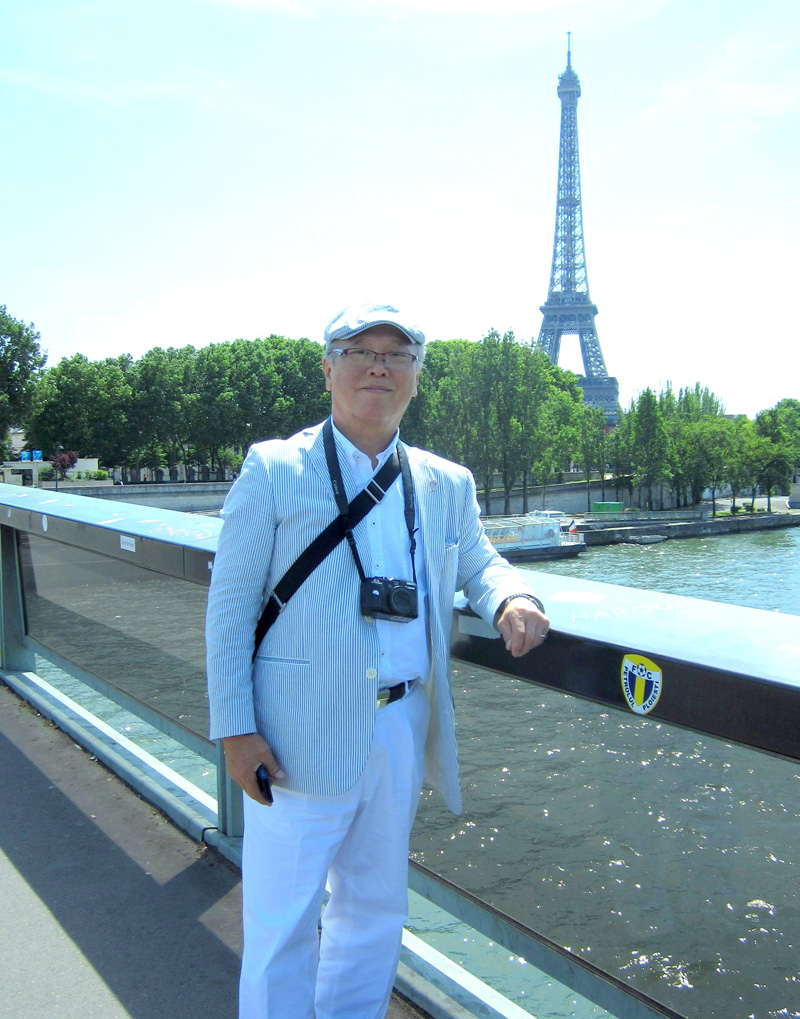 On a bridge over the River Seine

But then we had another disaster. On Sunday afternoon, after shopping at Printemps department store, we strolled along the old streets. The weather was nice, and after we didn’t find anything that we wanted to buy at a flea market, we had a poor quality meal at a cafeteria, and then walked down a big avenue toward the Paris Opera.
A woman walking toward us pointed to the Japanese traditional dancer Hanayagi Kihi’s backpack, and said, “The zipper is open”. (Of course, she spoke in French.) Immediately, Ms. Hanayagi felt that something must have been stolen, and she looked in her backpack.
Oh no!
She had been robbed. Her wallet had disappeared. She’d lost 500 Euros in cash and three credit cards.
We were in a panic, but it was too late to try to get her things back. We were angry, but there was nothing we could do. We were more worried about the credit cards than the cash. We tried to contact the credit card companies by telephone, but we couldn’t reach them. Then, we called the Japanese Embassy and asked the staff to explain the procedure for canceling credit cards. That solved the problem.
Thinking back now about that incident, I wonder how the woman who was walking toward us knew that Ms. Hanayagi’s backpack was unzipped. I’m thinking, “She must have been one of the crooks!”
I learned a lesson from this incident. You have to keep your wits about you in Paris, or you’ll soon be taken in by some sharp practice. However, although I’ve visited more than 40 countries, luckily, I haven’t had any money stolen even once…
After that, we went from Paris to Bordeaux to inspect possible performance sites for November. We sampled Bordeaux wine, which we had very much looked forward to doing. Then we returned to Japan.
A half year later, in November, eight of us arrived in Paris for our performances.