I am Tsuruga Isejiro. I want to introduce myself a little for people who don’t know me. I am a student (deshi) of Tsuruga Wakasanojo shishou whose web site this is, and a shinnai performer. My shishou has written a four-part essay in this blog about the performance in Poland and the disasters in Japan.

I went to Poland with him. The trip impressed me deeply. It was an unforgettable experience. In that context, I want to write first about Auschwitz.

I didn’t know many details about the extremely cruel history of Auschwitz, but my shishou insisted on going there. I was interested, but I hesitated to go because I knew that I would be easily moved by going to such a place. When I was a teenager, I went to the Hiroshima Peace Memorial Museum and the Nagasaki Atomic Bomb Museum, and I remember that for a while after that, I had nightmares.

When we arrived at Auschwitz by bus, it was already 3 p.m. There were few tourists there. We were introduced to our guide, Nakatani-san, and all of us started to follow him.

I was tense. I wondered why Nakatani-san, a Japanese, was working there as a guide. It seemed like a trivial thing for me to be thinking about. Nakatani-san must have been in his mid-forties. That’s about the same generation as me, so for sure he didn’t experience World War II. Why would he go so far from Japan, to a strange country, and especially to Auschwitz…. Why was he there?

We saw a group of junior high school students. Nakatani-san told us that they looked Jewish. Their great-grandfathers and great-grandmothers were killed in Auschwitz. This place is their grave, too.

It was very difficult to see all of the concentration camp in one day because it is very big. Nakatani-san chose the places that we would see. Because my shishou has already described it in his diary in this blog, you probably already have a clear image of it, and I won’t go into detail. 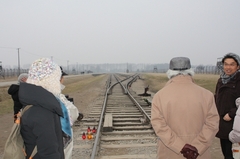 Nakatani-san’s explanations were easy to understand, and not opinionated. He spoke very calmly, and did not describe his personal situation. He simply described the facts, from beginning to end. But, in his calm presentation, I could feel his very serious view about this place and its history.

Nakatani-san explained the historical involvement of Germany, Russia, and other countries in Europe, Japan, and the Jews. He spoke only the truth. Why did people, and why did one country do such extremely cruel things? Nakatani-san must have studied very hard. I’ve continued to speculate about that. Some guides give their own opinions heatedly, but because of Nakatani-san’s calm presentation, I could walk cool-headedly behind him to the end of the tour. 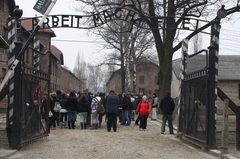 I was scared that I’d be tortured by the huge number of ghosts in this place, but, to the contrary, now I want to study history more. I’ve become brave enough to continue to think about it without being scared. I talked with Nakatani-san about that. He answered, “Many types of people come here. At a minimum, I become energized here.”

I didn’t ask Nakatani-san why he went to Auschwitz to be a guide. If I ever have a chance to see him again, I’d like to try to ask that question.

If you go to Auschwitz, I recommend that you use Nakatani-san as a guide!! I’ve heard that he is so famous that he is mentioned in a very popular guidebook, Chikyu no Arukikata (How to Walk on the Earth).

If many people visit Auschwitz, maybe that will purge the bad spirits from the place.